When I crossed the finish line – I had a familiar feeling wash over me. We lost. I lost. I looked up at my Mom and said, “I feel like I just lost a big hockey game.” The feelings were merely identical. Disappointment, failure, anger and sadness washed over me knowing I did not accomplish what I set out to that day at Eagleman 70.3. My Mom’s response surprised me, “that just means you’re competitive, just like you were in hockey.” After hearing that, I thought maybe this was the race that now made me believe I was finally a triathlete, not a hockey player who is trying to swim, bike and run. Even so, Eagleman was a disappointment but lessons can always be learned and positives can always be taken out of a tough day.

We parked at the Middle School parking lot to get on the shuttle when the news broke that it would not be wetsuit legal. Now to all of your swimmers out there who laugh and make fun when you see people freak out over this – get off your high horse. If there was some way to have a “wetsuit” for running that made you faster and then one day you aren’t allowed to wear it, you would be bummed as well. I am not scared of the distance of a half or full without a wetsuit, but I do know I will lose more time to the top swimmers without one and sure enough I did. We were the last wave to start and I thought the swim was fairly choppy once we got going – but I just swam the best I could. One positive is I did swim six minutes faster than my previous non wetsuit half swim – 1 year ago. Still slow as molasses but faster.

Going in to the race – if I was going to grab that top spot I would need to make up time somewhere and take a chance on the bike. After my swim – there was no way I was going to hold back now. Plus, I wanted to see how well the new bike performed. Not much to say about the bike course, it was flat and I think fairly fast but since I was in the last wave there was a lot of weaving and bobbing going on to get passed the other bikers. I will note that in some sections there is a rumble strip on the side of the road in the bike lane which makes it incredible annoying to pass people. I was passing a lot of people and keeping a fairly strong effort that may give me a fighting chance on the run. I did notice my face was caked with salt already even with constant hydration and my left butt was literally being a pain in my ass for the last 20 miles or so. I wasn’t sure how the run would go but – I was going give it my all. I did have my fastest bike split ever for the half distance and only biked 2 minutes slower than my half in Charleston this year with a similar course that was 3 miles short. I’ll take it. 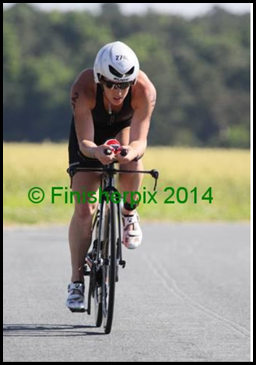 I believe in my run but sometimes it just doesn’t happen. I didn’t have the legs I needed to push a sub 1:30 half and the worst part is knowing it in those first few steps. Yes, it was hot and I can’t say for sure if it would have been different if the heat wasn’t a factor but the legs were not turning over quite how they should. I knew the run would be mostly a mental game which thankfully HB has well prepared me for (think running around a track for 2 plus hours) so the main goal was to keep pushing and maybe things would turn around. I kept moving at a respectable pace until the turn around grabbing water and ice at every aid station. Side note: I thought the aid stations were very well stocked with great volunteers but there was one area on the course that went way too long without an aid station. Around mile 9 is when I felt the side stitch come about…it was so painful to run. I did my best to slow down and let the pain go away then pick up the pace until it came back and repeated this until the finish. I know I am a salty sweater and this race confirmed salt tabs are a must on anything that resembles a hot day.

As you can see from the finisher picture – there was pure disappointment crossing the finish line. I felt like I let myself down, my coach, my parents who drove 6+ hours to see my race on my birthday and my friends who have been cheering and believing in me. I want to compete against the top girls in my age-group and I failed to do that at Eagleman. 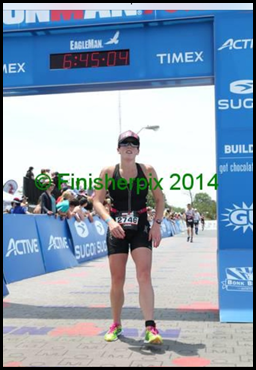 Bad races will happen – but it always fuels the fire to get back to training for the final push to IMCDA. It was great to finish off this week with a long brick on Saturday of a 100 mile ride with a 40 minute run followed by one of the most mentally challenging long runs I have ever done before on Sunday. Looking back on Eagleman now, I know the race wasn’t great but the fact one week after I can bike the fastest 100 miles I’ve done and run that many laps on a track gives me confidence in my fitness and ability going into Ironman.